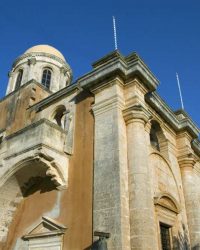 The Patriarchal Monastery of the Holy Trinity Tzagarolon is one of the most important monasteries of the Venetian fee in Crete with rich offer in history and education of the island. Located at the foothills of the Cross, to “Tzompomylos” of Cape Meleha.

According to tradition, confirmed by documents of the Venice files built by the brothers Jeremiah and Laurentius Tzagarolon who came from great Venetokritiki family and had strong influence in both the Orthodox population and Catholics Venetians. Jeremiah was a great scholar, a friend of the great Patriarch of Alexandria Meletios Pegas and candidate himself for the throne of the Ecumenical Patriarchate. He was the holder of Greek and Latin culture, as evidenced by his writings, and bilingual inscriptions have survived in large numbers to the buildings of the monastery. His education and his knowledge on contemporary European architecture of the time is evident from the very group that designed and built and where identified specific effects of the Veronese architect of the 16th century Sebastiano Serlio.

In place of the Holy Trinity was a small monastery belonging to the monk Joachim Sofianos, which was in decline after his death. For this reason it was commissioned by the Venetian authorities in the monk of the Monastery of Agia Kyriaki Jeremiah Tzagarolon the reconstruction of the 1611. Jeremiah begins the reconstruction of a very large complex that will continue his brother Lawrence after his death around 1634. In 1645 Chania fall into the hands of the Turks and interrupted the construction work had reached the base of the big dome. During the Turkish occupation the monastery known as Selvili Manastir (Monastery of cypresses) and is often embarrassed as inform our documents and browsers. In the great Greek revolution of 1821 the monks flee but no chance to hide the precious relics burned by the burning, or snatched.

After the revolution the monastery was reconstructed and the building works are completed. In those years he had acquired large real estate and had many components (dependencies), and even in Smyrna.

The monastery of revenues contributed to maintenance of Greek schools Chania, and from 1892 Seminary works in buildings constructed in the east wing.

Today, after many historical adventures, the monastery continues to play an important role in the religious and economic life of Crete. With many visitors, it is one of the most important monuments of the place for the emergence of which thoroughly ensures the brotherhood of the monastery in tandem with the Ministry of Culture and the local 28th Vyzatinon Antiquities Chania.

Inside the monastery, built by the Venetians lords Jeremiah and Laurentius Tzagarolon, formed the Trinity Tzagarolon Museum exposition church icons and utensils.

From the exhibits of the Museum of the Trinity Tzagarolon singles manuscript eilito (cloth covering the altar with the image of the Holy Sepulchre) of the 12th century, and the icons of 16th-17th century: St. John the Theologian, St. Nicholas , the enthroned Christ, the Life Giving source and the Second Coming.

The visitor besides the tour of the monastery and the Museum of the Trinity Tzagarolon can see up close how it is produced and exported by the monks of the unique quality organic olive oil, and wine, honey and vinegar and soap of olive oil.

We use cookies to ensure that we give you the best browsing experience on our website. By continuing to browse the site you are agreeing to our use of cookies. Accept